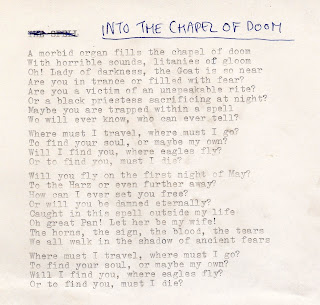 The original lyrics, typewritten in 1992

When 'The Book Of The Heretic' was released in 1996, reactions to 'Chapel Of Doom' were very positive. Playing the song live was something that never came up at the time, though, since it is not really an easy song to play and also because we didn't have live keyboards at the time so it was more or lees impossible to do anyway.
We never forgot about the song, though and when we picked a few more old songs to record anew for the 'Sermons Of The Infidel' compilation in 2014, it didn't take us long to decide to include 'Chapel Of Doom'. The new version turned out pretty decently, with a slightly more compact arrangement than the original version and of course a much better sound as well as an excellent guitar solo.

The 2014 version released on 'Sermons Of The Infidel'

A few years later again, after we had played at the 'Odium Nostrum' festival in Utrecht, we were hanging out backstage and while having a few beers we were discussing possible songs to add to the live set. When 'Chapel Of Doom' was mentioned, we all quickly agreed it was worth a shot to try to play it live. So we started rehearsing it and when that went to our satisfaction, we played it live for the first time at the 'Tampere Black Mass' in October 2016. Since we were pleased with the way the song works live and the audience response to the song was great, we also played it during the 'Fires Of Destiny Over Europe' shows in 2017."
Posted by Countess at 16:56