New album 'Banners Of Blood' to be released February 11

On February 11, we will release our long-awaited new full-length album, entitled ‘Banners Of Blood'.

'Banners Of Blood' is our sixteenth full-length and features twelve tracks of uncompromising metal music, blending first wave Black Metal and traditional Heavy Metal in a way only Countess can.

The albums features two songs in Dutch and, for the first time, a song in Russian: 'Ledovoye Poboishche' ('Battle On The Ice') tells the story of Alexander Nevsky's great victory over the crusader knights in 1242 CE. 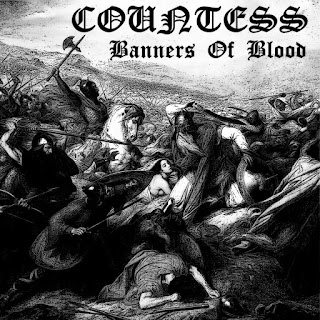 The new album also marks the first appearance on a Countess full-length of guitarist Valgard and keyboardist Häxa.

Everyone can get a first taste of the new album as of today. A digital single has been released for the song 'Last Man Of Honour'. This song was inspired by the life of Saigo Takamori, who is often considered to have been the last true samurai and who was born on this day in 1828 CE. The single is available on all major platforms such as Spotify, Apple Music and Deezer as well as a free download on our offical Bandcamp site.

1. Sword Of The Millennia
2. Below The Sky
3. Wall Of The North
4. Ledovoye Poboishche
5. Night Of The Fallen
6. Banners Of Blood
7. Pagan Man
8. Fall Of The Achaemenid Empire
9. Slachting Der Saksen
10. Last Man Of Honour
11. Toortsen Uit Het Verleden
12. Sword Symphony
Posted by Countess at 10:11 No comments:

New single out on August 7

While we are still working hard on our new album, we will already release a brand new song on all major platforms on August 7 (Elizabeth Báthory's birthday, coincidentally). Spotify users can already pre-save the song using the link below.

Posted by Countess at 10:49 No comments: 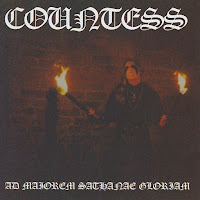 We have released a couple of new digital singles this year: new recordings of classic songs with a few arrangement tweaks and improved production.

A new version of 'The Wrath Of Satan's Whore' was released on April 16. Originally released on 'Ad Maiorem Sathanae Gloriam' in 1995, this song is a definite classic. Read all about the song's history here.

On July 17, a new version of 'Ritual Of The 7 Priests' was released. This song was first released on 'The Return Of The Horned One' in 1994 and, like 'The Wrath Of Satan's Whore', is still a live staple today.

Like the new version of 'Heilig Vuur' we released last year, all these new versions are available as free downloads on our official Bandcamp site.

A new version of 'In Hate Of Christ' was released on November 16. Originally released on 'The Book Of The Heretic' in 1996.

Though released in 1996, this song wasn't played live until almost two decades later. 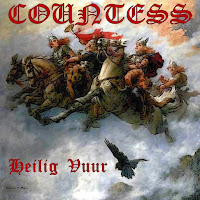