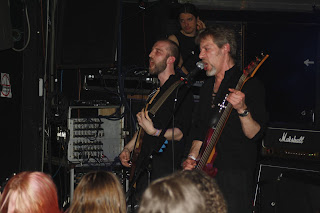 With regret we have to announce that our drummer Wolfram has decided to leave the band. He made this decision because he feels he can no longer give the band the time and attention it deserves. We understand and respect his decision as we know it was not made lightly.

Wolfram joined Countess early in 2014 and played an important part in the band's return to the stage. His invaluable contribution to the band will be missed by all of us. We wish him all the best in the future and trust he will remain part of the Countess family.

At the same time, we are pleased to announce Mortüüm as our new drummer. He is a skilful and versatile drummer with a lot of experience in many different bands. We have been rehearsing with him for a while and he played his first show with the band in Oberhausen last week. Following Wolfram's decision to leave the band, Mortüüm has agreed to join Countess on a permanent basis. We welcome him to our ranks and look forward to presenting him to our fans at future shows.

Posted by Countess at 17:47 No comments:

Two decades ago today, Countess' third full-length 'Ad Maiorem Sathanae Gloriam' was released. Time for Orlok to take a trip down memory lane and write down some recollections from the creation of this classic record . . .

"In September 1994 I took a trip to Regensburg to deliver the master tape of 'The Return' to Opyros, who would release it on Nazgul's Eyrie Productions. The trip included a visit to one of Elisabeth Bathory's castles, Lockenhaus, where the pictures for the booklet of 'The Return' were taken. Upon our return to Regensburg, we wrote the lyrics to 'The Wrath Of Satan's Whore' together on a napkin in a Spanish restaurant and altogether this journey proved rather inspirational. So when I got home again, I immediately began working on new material.

Before long, I had enough songs written for a new album. I recorded these as demo's and sent them to Opyros (this was before 'The Return' was even released, mind you). He was quite enthusiastic about the new stuff and suggested it might be interesting to record the new record in a real studio this time. Hammerheart recommended 'The Nick' in Mheer for these recordings, where he had just been to record the first Bifrost album 'Pagan Reality', so we booked the studio for late January 1995 and prepared for the recording sessions.

When we played at the 'Veneration Of The Dead' festival in 2014, it was our first show in almost seventeen years other than a try-out a few days earlier in a pub in Leiden. So that was a special occasion. Little did we know that we would play the festival again this year and that this would also be a very special occasion.


Since we played the festival in 2014, we weren't planning on playing there again this year. However, things changed when it was announced that Barathrum would play at the festival this year. We have a special relationship with the legendary Finnish band. We were both on Nazgul's Eyrie Productions in the nineties and we did a short tour together, with Sabbat from Japan, back in 1997.