New EP ‘Sermons Of The Infidel’ to be released June 17

On June 17, Dutch Black Metal veterans Countess will release a new EP entitled ‘Sermons Of The Infidel’. The EP will be exclusively available digitally through the band’s official Bandcamp site.


‘Sermons Of The Infidel’ features 35 minutes of METAL spread over eight tracks: six brand new versions of Countess classics and two new songs. The EP is the first Countess release since 2011’s full-length ‘On Wings Of Defiance’, two tracks of which are featured here in killer new renditions. All songs are exemplary of Countess’ unique blend of first wave Black Metal and traditional Heavy Metal. 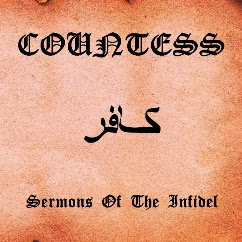 
‘Sermons Of The Infidel’ also marks the return of guitarist Zagan, who was last heard on the legendary ‘Revenge’ albums over a decade ago. His fretboard wizardry adds yet another dimension to the unique musical tapestry that is Countess.


The EP will be available for download in several high-quality formats of choice and includes a printable cover, back inlay and CD label (in pdf format). From June 17, ‘Sermons Of The Infidel’ can be purchased here.
Posted by Countess at 10:10